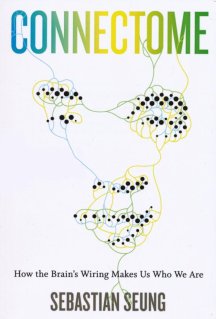 Connectome: How the Brain’s Wiring Makes Us Who We Are by Sebastian Seung

An accessible book to introduce and help explain the exciting theory that the mind is entirely encoded in the particular architecture of your brain. The central theme of “Connectome” is that such a mapping of the connections between neurons provides a far more complete picture of mental activity than other brain models. As Seung explains, mapping a brain’s connectome would enable highly specific examination and treatment of a brain, going so far as to allow correlation of neuronal activity patterns with memory and conscious experience itself.

The catch is the monumental technical challenge of obtaining and handling so much data, as mapping a connectome, like mapping a DNA genome, is a computationally expensive process. In fact, mapping the connections in a human brain is many, many orders of magnitude more complex given the density of neurons and the intricacy of their connections in brain tissue. Furthermore, technology with the proper specificity to automate the delicate task is still in early stage development. Thus a corollary theme in the book relates to the pace of technological change: the field of connectomics banks on the continuation of exponential growth in computer processing speed (e.g. Moore’s Law) and accompanying technologies. Assuming that technology continues to progress as it has, Seung proposes that connectomes will naturally become the substrate of which we discuss our mental selves and our conscious identity.

Other notes: The fundamental idea of the connectome is persuasive and fascinating, but perhaps because of such preexisting interests, this book was less in-depth than I was hoping for, and much of the content therein will be familiar to other fans of cognitive science or avid tech enthusiasts. Seung devotes the end of the book to the interesting future possibilities of cyber immortality, but they come with the usual speculation & caveats and don’t yield much of a takeaway message. Seung’s writing style is natural if not as crisp as a science journalist, just occasionally veering too folksy for the science (with a few awkwardly stilted metaphors).

I was originally introduced to Sebastian Seung’s “Connectome” in his excellent 2010 TED Talk.

This is a text widget. The Text Widget allows you to add text or HTML to your sidebar. You can use a text widget to display text, links, images, HTML, or a combination of these. Edit them in the Widget section of the Customizer.
%d bloggers like this: